A view of Barcelona from the City of London, by Alejo Ortuño

After two troubled years, the city of Barcelona is once again getting ready for Saint George’s Day, Sant Jordi in Catalan.

One of the most beloved festivals in Catalonia, Sant Jordi is now returning to normal for the first time since the beginning of the pandemic. The festival will breathe new life into the city and bring in large numbers of people keen to enjoy the Spring event. 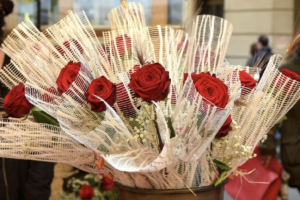 The legend of Sant Jordi tells of a knight who, in order to save the princess of the kingdom, slew the dragon that was terrorizing the town of Montblanc. Out of the dragon’s blood grew some roses, which Sant Jordi gave to the princess. In response, the princess told the knight a story, thus giving rise to a new custom: now, each year, books and roses are exchanged as symbols of love on April 23rd.

Five things you should know about Sant Jordi in 2022.

A literary “superilla”, new this year

This year a massive new “superilla” (a large pedestrian area) will be created between Diagonal and Gran Via and Balmes and Pau Claris, with cars being diverted to the adjacent streets. Passeig de Gracia, in the center of the area, will be set aside for professional booksellers and florists.

With the Ramblas reserved for associations and organizations, a total of 140,000 square meters in the center of the city will be dedicated to the sale of books and roses. 300 stalls will be spread over 4 kilometers in the superilla in the city center, while there will also be special arrangements in six other districts in the city, underlining the City Council’s commitment to all the citizens of the city. 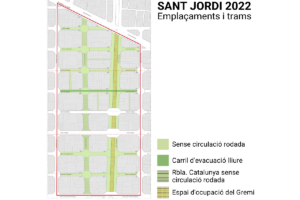 The intention is to create a “superilla” in future years as well, as it should enable both traders and the general public to get more out of the most magical day of the year. In addition, stallholders will be allowed to start setting up their stalls on the 21st in order to make sure everything goes smoothly. This will give them an opportunity to prepare for what is the most important day of the year for the book and flower sales sectors.

The aim of the festival this year is to put the last two years behind us and to return to the success of 2019. In 2019, 85% of the books were sold on Sant Jordi’s day—a total of 1.6 million books and a turnover of 22 million euros. It is of vital importance that this day succeeds this year as the culture sector was particularly hard hit by the pandemic. 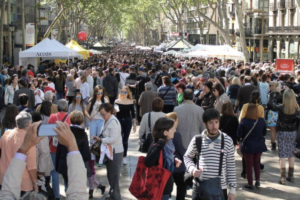 Sant Jordi will last one month this year

Activities got underway well before April 23 this year. Món Llibre, for example, a literary festival aimed at the youngest readers, took place on April 2 and 3 and was held in three venues—the CCCB and Poblenou and Nou Barris public libraries.

Sant Jordi will be officially opened by the author Imma Monsó in an event to be held in the Barcelona City Hall Saló de Cent at 6.00 on 22nd April. And on April 23rd there will be a breakfast at the Palau de la Virreina, which will be attended by the speaker and other authors and personalities from the publishing sector.

After two difficult years, Barcelona Global will once again be hosting a traditional Sant Jordi breakfast in the Mimosa garden of the Mandarin Oriental Hotel in Barcelona, a unique spot in which where to start this magical day. The intention of this family event is to make Sant Jordi known to the international community living in the city. 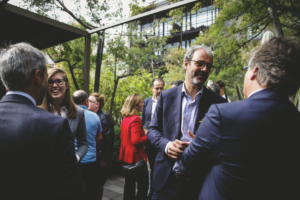 Casa Batlló and the legend of Sant Jordi

Nothing represents the spirit of Sant Jordi better than the Casa Batlló. Every year, the balconies on the façade of Gaudí's building are adorned with roses, transporting passers-by back to the days of the legend. Tours are offered every year for visitors who are keen to discover how Antoni Gaudí depicted the legend of Sant Jordi in the architecture of Casa Batlló. The roof represents the dragon's back, and the flower-shaped balcony is that of the princess, while the cross on top of the building is the hilt of Sant Jordi’s sword and the balconies and the columns of the tribune represent the skulls and bones of the dragon's victims. More symbols are to be found inside the Casa Batlló, which this year has been refurbished and hosts a magnificent exhibition.

For many of those who live in Barcelona, Sant Jordi's Day provides a unique opportunity to stroll around the city, the most magical day of the year. It’s an event that simply can’t be missed.