Barcelona’s Zona Franca is home to DFactory, the new “Industry 4.0” factory, a building in which every possible technological dream can be fulfilled.

Although known primarily as a cultural and tourist destination, Barcelona, is looking towards an increasingly 'techy' future. Barcelona is a hub for technological innovation, in particular in digitalization and in implementing strategic digitalization plans. More and more Spanish and international companies are seeking to join the unique, diverse, and complex ecosystem that goes by the name of Industry 4.0.

DFactory, located In the Zona Franca area, only 15 minutes from the city center and close to the airport, is a '21st century factory,” a multipurpose space in which leading technology companies form a cluster with SMEs and innovative startups.

DFactory is a “springboard” for companies that are (or wish to be) part of this emerging technological ecosystem. It also provides a location for product development and research for consolidated companies in the sector. DFactory’s aim is to head up the development of Industry 4.0 nationally and internationally, so providing added value to Barcelona and its metropolitan area.

The “4.0 space,” an initiative promoted by the Consorci de la Zona Franca de Barcelona (CZFB) in collaboration with the Leitat Technology Centre, is the first of its kind in Barcelona. The aim is to become the leading Southern European technology center, a place in which ideas, research projects and innovation are constantly generating new dynamics and synergies. 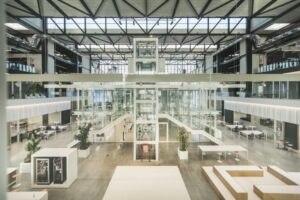 So what exactly does Dfactory offer?

An ecosystem for Industry 4.0: Industry 4.0, possibly the most radical revolution of all, sets out to fuse all possible technologies in order to make the impossible possible. Companies are embracing this change by changing the way in which innovation, digitalization, and technological performance are developed.

DFactory is a space that offers cutting-edge technologies such as 3D printing, robotics, cybersecurity, artificial intelligence, sensors, and advanced manufacturing to any company that wishes to incorporate them in their production process. The aim of the new economy and industry 4.0 hub is to nurture collaborations and synergies by means of technology and to become a networking and innovation hub that attracts and retains talent.

A strategic, unique and sustainable space: Close to the port of Barcelona and El Prat airport (entry points for numerous business visitors and tourists), and very close the center of Barcelona, the hub is in a privileged location. The 17,000 square meters of office space, meeting rooms and laboratories was designed by Torrella Engineering, who have combined architecturally innovative styles with the industrial feel of a traditional factory, producing glass finishes, diaphanous interiors, and the latest technology in sustainable construction systems.

The space has photovoltaic panels on the roof in order to take advantage of the building’s full potential for generating sustainable energy, making it a place where technology meets the ecological transition.

The great success of the launch augurs a promising future for this new concept. With only 10% of its surface area still available, the Consorci de la Zona Franca will extend the project to adjoining properties. The new land, which covers an area of 72,500 meters, will host several buildings for different technologies, with planned investment totaling some 70 million euros. 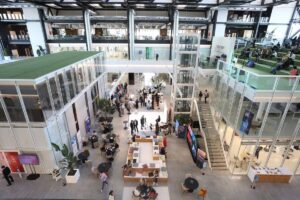 There is a strong desire to keep growing, however, which is why El Consorci de la Zona Franca is continuing to make links with companies who are keen to become part of the fourth industrial revolution in Barcelona. The goal is to offer work to some 500 workers and host up to 100 companies.

Areas of activity: The cutting-edge technologies developed in Dfactory are very diverse and include 3D printing, robotics, cybersecurity, AI, sensors and advanced manufacturing. Other services include specialized training, R + D + I, and consulting services.

One of the latest projects, conducted by IAMB3D Hub and promoted by the Leitat research center, involves studying the use of polymers in filament, powder or resin form. 3D printing is the production and design tool of the future and is seen throughout the technology hub. Multinationals such as HP, with their own headquarters in the Zona Franca, already have their own equipment within the factory. In fact, HP has established a parts manufacturing laboratory, whose objective is to produce certain parts like sustainable packaging, footwear, and a range of customized solutions for the body, whilst offering a digital manufacturing experience that serves as a guide for its customers.

5. Management: The Consorci de la Zona Franca is the management body responsible for this initiative. Its main strategic lines include ‘acting as a catalyst for the economy of Barcelona and its metropolitan region, as well as being a driver for business transformation and progress towards the 4.0 economy'.

While it is true that the Consorci specializes in industrialization in zona franca area, the public company is also responsible for organizing events of economic interest and innovative events such as the Barcelona Woman Acceleration Week (BWAW) and the Barcelona New Economy Week (BNEW). The Consorci is composed of representatives from the Spanish government like Pere Navarro, who is president of DFactory, as well as the Barcelona City Council, and the main economic bodies in the city.

Are you going to miss it?