Barcelona is synonymous with music. The city has always been known as one of the great music capitals in Southern Europe.

So it is not surprising that Barcelona is home to some of the best music festivals in Spain.

Every year, especially in summer, the city hosts a wide variety of music festivals that attract numerous fans from all over the world. And this year we won’t be held back by the restrictions of the last couple of years.

Four outstanding festivals are described below:

The name Barcelona International Festival of Advanced Music and Multimedia Art may not ring a bell, but the name it normally goes by, the Sónar Barcelona, certainly will.

For three days in mid-June every year the festival welcomes more than 120,000 visitors, who come to enjoy music of all kinds on the stages that are found throughout the Raval, at the Fira de Barcelona, and in the city center.

Sónar is now one of the most prestigious events in Europe. No longer merely an festival of electronic music, the Sónar+D section attracts conferences and talks on the latest trends in the field.

Cruïlla, music and other performing arts

The Cruïlla festival to Barcelona in 2008. It is now held annually at the Forum during the month of July.

Apart from performances by top Spanish and international artists such as the Black Eyed Peas, Kylie Minogue, Of Monsters and Men, Txarango, and Manel, the festival also offers several other performing arts.

The festival was held as normal during the pandemic , although more than 25,000 daily antigen tests were necessary to prevent contagion. This year’s festival, which will take place on July 6,7,8 and 9, will be held in the unbeatable setting of the Parc del Fórum.

Primavera Sound, a festival emulated around the world

Think of a festival that was created in Barcelona and is known throughout the world, and Primavera Soundcomes immediately to mind. The festival, founded in 2001 in Barcelona and held at the Parc del Fórum, attracts audiences of different generations and varying musical tastes due to its extensive lineup.

Its format is so successful that it has even been exported internationally to cities like Oporto, Los Angeles, São Paulo, Santiago de Chile, and Buenos Aires. 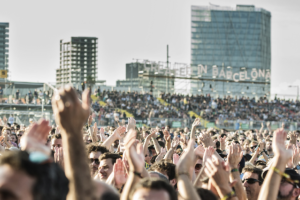 Attendance records are broken every year, proof of its resounding success. The first festival in 2001 attracted 8,000 people, while the 2019 festival reached a staggering 190,000. In fact, this year’s festival does not appear to be lagging behind, with more than 200,000 tickets already sold for the two festival weekends: June 2 to 5 and June 10 to 12.

The Jardins de Pedralbes festival was founded seven years ago by the Concert Studio group. This unique festival breathes new life into the Palau Reial park, home to a royal palace, only a few minutes from the city center. 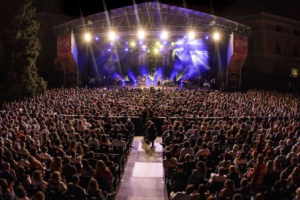 The quality of the artists, the atmosphere, and the stage, which is located in front of the façade of the royal palace, make this festival a MUST for those who love both music and Barcelona.

This year’s festival marks a return to normalty, with more than 33 artists who will pass through Barcelona between July 7 and 24.

It would be wrong to conclude without mentioning the festivals that also take place outside the city of Barcelona. The pleasant Mediterranean climate and our quality of life mean that there are a large number of festivals that take place during the summer months. These include: 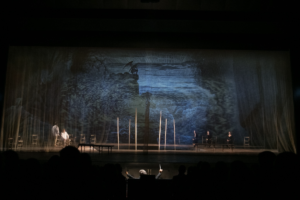 So, which festivals will you attend?