Previously known as the Camera Musicae Symphony Orchestra, the Franz Schubert Filharmonia was founded 15 years ago. Its aim is to creating high quality music that reaches all listeners and transmits the artistic spirit of Franz Schubert.

The orchestra has grown steadily since its beginnings, and its outstanding artists attract a loyal audience of music lovers and young people, an average of some 85,000 concert-goers every season.

In his short life, Austrian composer Franz Schubert played an important role in the development of the revolutionary Romantic Movement, which ushered in a new range of musical languages.

Following in his footsteps, the aim of the Franz Schubert Filharmonia is to become a first-class European orchestra. We seek to achieve the highest standards of performance, while also encouraging innovation and developing young talent. The orchestra is home to a new generation of musicians, some of the best in the country, and welcomes prestigious soloists and conductors from all around the world. The orchestra performs in outstanding venues such as the Palau de la Música Catalana.

With a passion for bringing symphonic music to a wider public, the orchestra has developed a digital platform to disseminate music around the world. The annual subscription enables viewers to watch concerts from the Palau de la Música Catalana via streaming. 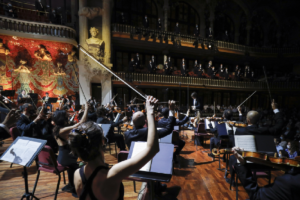 Blessed with meticulous aesthetics, cameras, cinematographic optics, and high quality sound, the Filharmonia Digital Hall Platform already has 6,000 registered users from around the world and it is expected to continue growing. Its goal is to support musical culture and the artists who make a living from it, and to bring the universal language of music to all corners of the world.

Along the same lines, the orchestra’s foundation seeks to generate social cohesion through music. To this end, it has created a range of programs, workshops and activities aimed at groups at risk of social exclusion, as well as specific programs to bring symphonic music to young audiences.

Among many initiatives that have an impact around the country, the Franz Schubert Filharmonia is working with other renowned institutions to promote Barcelona as a center of classical music. The orchestra helped to organize the 3rd Barcelona Obertura Spring Festivalin March in which it presented a program consisting of Brahms’ 2nd Concerto for Piano and Orchestra and Tchaikovsky's 5th Symphony.