Oriol Bohigas, architect, urban planner, teacher, intellectual, and politician, was one of the fathers of the well-known Barcelona Model and one of the leading figures in Catalan and Spanish architecture.

His work stands out not only for his impressive constructions, but also for his way of seeing cities as much more than buildings.

Bohigas was born in Barcelona into a family that had close connections with the art world. In fact, his father was technical secretary of the Museu d'Art de Catalunya, the predecessor of today's MNAC. In 1951 he set up a partnership with Josep Maria Martorell, which, when David Mackay joined in 1962, would become MBM Arquitectes. Over the last 45 years, the company has carried out more than 500 architecture, urban planning and design projects.

Bohigas helped to transform the city and open Barcelona to the sea, which in previous years had been somewhat ignored. Bohigas helped to bring all the neighborhoods in the city up to date, regardless of their social standing. He also prepared the city for the 1992 Olympic Games. He was always clear that Barcelona was the focus of his work. Few architects and urban planners have had as much impact on a city as Oriol Bohigas in Barcelona.

He created a wide range of architectural works, with projects ranging from cultural to urban planning. Here are six of his most iconic works:

1. The Olympic Village: Most people already know that the Barcelona 92 Olympic Games served to open Barcelona to the world. This involved major changes to certain areas of the city. One example was the location of the Olympic Village itself.

The impoverished and highly industrial area was transformed into a new neighborhood looking out on the sea. The work of Josep Martorell, Oriol Bohigas, David Mackay and Albert Puigdomènech was modeled on the "island" block design found in the Eixample area of Barcelona. 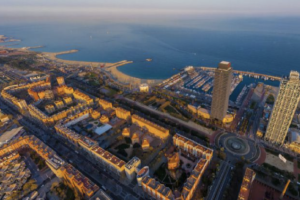 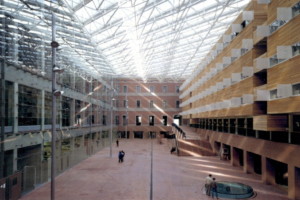 3. UGT Head Office: The regeneration of the Raval neighborhood had a range of different objectives, one of which was to provide new facilities for citizens. This involved the building of the new L-shaped headquarters of the UGT trade union between 2002 and 2008, along with other urban regeneration undertakings such as the opening of the Rambla del Raval and the construction of the Filmoteca de Catalunya. 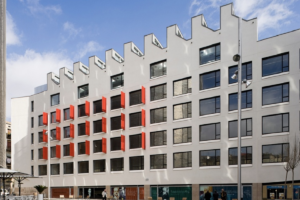 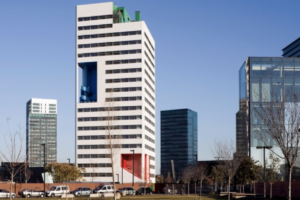 5. RBA head office: In 2007, MBM Arquitectes began the design and construction of the RBA publishing group's new building in the 22@ district. Its ventilated facades detect the amount of sunlight and regulate the interior lighting needed, and the building has photovoltaic panels for electricity production, etc. With its 17 floors, 19,000m2 , and two clearly differentiated overlapping bodies joined by a large terrace, the building leaves no-one indifferent. 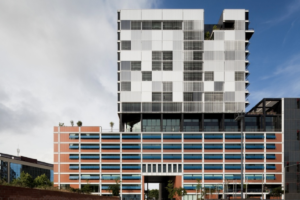 6. Design Museum (DHUB): The Design museum, built in 2013 and known for looking like a stapler, was Oriol Bohigas's last contribution to Barcelona. This building, which stands in Plaça de les Glòries, contains some of the characteristics of many of the architect's works and houses the Museum of Decorative Arts, the Textile and Clothing Museum, and the Graphic Arts Museum. The DHUB is now a key reference point for the design scene. 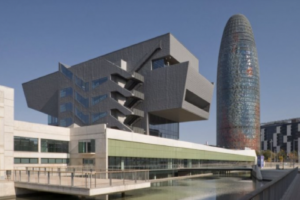 Oriol Bohigas represented a turning point in Catalan architecture that is reflected in his achievements and numerous awards. These include the Gold Medal for artistic merit of the city of Barcelona, the Cross of Sant Jordi, the National Architecture Award, and the National Culture Award.