Many will agree that Barcelona is a city in which people are passionate about classical music. Proof of this its long association with the city. Classical music in Barcelona, which is reimagined constantly, has captivated numerous people over the generations and continues to lead the field.

Today, Barcelona is a benchmark not only in Spain, but in Europe as a whole, thanks to the prestige of its programming and its pioneering institutions.

These institutions include the Gran Teatre del Liceu, the Palau de la Música Catalana, and the Auditori, three temples of music that must be visited by anyone passionate about classical music. However, they don’t only excel in programming or attracting great artists; they go a step further and offer not only music, but also culture, education, and philanthropy.

Today we take a look at the Fundació Conservatori del Liceu, a cultural and educational institution and one of the most prestigious music schools in Spain. 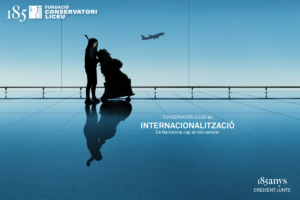 The Conservatori del Liceu is one of the key teaching institutions in the field, currently offering musical education to more than 10,000 students. It aims to make a positive and direct impact on society through the cultural life of the country. Its goal is to serve society through teaching, artistic expression, and transfer of knowledge, always in the firm conviction that music contributes to human, ethical and social progress.

Although the foundations and identity of the Conservatori del Liceu are built on classical music and singing, it has gone a step further, opening its horizons to all kinds of musical styles. In fact, it has pioneered the teaching of other types of music, such as flamenco, jazz and modern music, which coexist naturally with classical music in the center's educational and artistic activities. 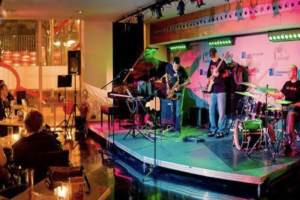 One of the priorities of the Conservatori del Liceu is to provide access to music education. For this reason, the foundation has a scholarship fund that is supported by institutions such as the Ferrer-Salat Music Foundation, the La Caixa Foundation, the Damm Foundation, and the Society of the Gran Teatre del Liceu. This has enabled some 159 students to develop their talent in Barcelona.

The Fundació Conservatori del Liceu has adapted to the times, updating its services, expanding the scope of its studies, keeping abreast with the main trends in European and world music, and attracting students, teachers and musicians from all over the world. This has given it an international reputation.

In fact, the Conservatori has collaboration agreements with numerous universities and other institutions in Europe, Latin America, the United States and Asia, in projects that have taken the name of the Conservatory and Barcelona all over the world. 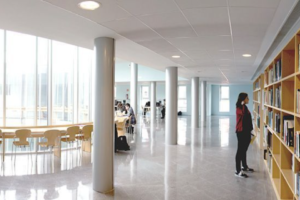 Library of the new building of Conservatori del Liceu.

The Conservatori del Liceu has delivered outstanding musical education over the last 185 years: 185 years of tremendous effort; 185 years of the highest musical performance and teaching; and 185 years of contributing to society.