Carla Maté - Insights on the Barcelona of 2040

Located at 211, Avenida Diagonal in Barcelona, the Glòries Tower is one of most iconic buildings in Barcelona.

The third tallest building in the city, it is the gateway to the 22@ district, Barcelona’s technology and business hub.

This unusual building is now a distinctive part of the city skyline and a must for visitors. Moreover, since the opening of the new observation deck, it now also offers locals a new and unforgettable view of the city.

Below we describe five things you may not know about the Glòries Tower: 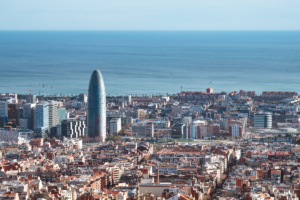 Currently owned by Merlin Properties, the building has an instantly recognizable shape; some claim that it bears a resemblance to the 30 St Mary Axe Street building in London, popularly known as the Gherkin.

The Glòries Tower resulted from a collaboration between Atelier Jean Nouvel and Barcelona-based b720. Inspired by Gaudí, Frenchman Jean Nouvel and Spaniard Fermín Vázquez looked to the outlines of the rocks of Montserrat for the form of the building.

Like a geyser bubbling up from beneath the earth, the colors of the building represent water, red hot at the base and cooler blues as it rises. 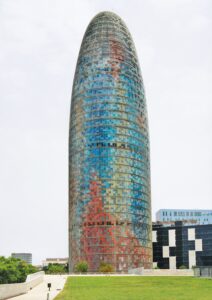 Today, the building is known as Glòries Tower, although many will recall that it was originally called Agbar Tower.

This was because the Barcelona water company Aguas de Barcelona, whose acronym is Agbar, was the first owner of the tower. The building was used as an office building by Agbar before it was sold to the American hotel chain Hyattel, who intended to turn it into a luxury hotel. In 2017, however, the famous building was bought by Merlin properties.

Greener in every respect.

You may not know that the Glòries Tower has been designated a green building by the EU; all the energy for the building is derived from a total of more than 60,000 membranes with photovoltaic cells, and, to reduce energy consumption, the occupancy rate of each floor is detected by its smart lighting system.

Barcelona residents will no doubt have seen the building at night, when some 4500 lights light up the façade. That said, the building complies with European efficiency and light pollution regulations.

Much more than just a viewing platform.

Although the novelty is undoubtedly its spectacular viewing platform, Glòries Tower offers a 360º experience that begins underground with Hyperview Barcelona, a viewpoint without windows! Big data on Barcelona gathered in real time enables one to see Barcelona as never before, as a living being, a beating pulse that changes color and shape and moves as you watch. 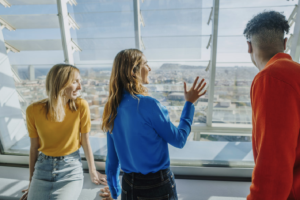 The highest lookout in Barcelona.

After the Hyperview, visitors take an elevator that shoots up directly to the 360-degree observation deck on the 30th floor, 125 meters above sea level. Here one can enjoy Cloud Cities Barcelona, an interactive sculpture by the Argentine artist Tomás Saraceno.

The sculpture is a spider’s web of more than 6km of tensioned cables that connect time-defying 5000 nodes in constellations designed by the artist. The aim is to prompt debate on issues such as architecture, the environmental crisis, and the urban public sphere within the “tangled web” that is life. This is both a cultural and a sporting experience that should be experienced. 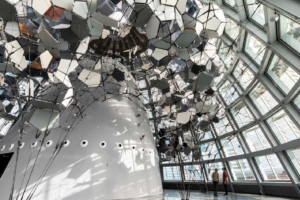 In addition to the installation, visitors are now able to enjoy the spectacular Glòries Tower viewing platform for the first time. The 360-degree observation desk provides a bird’s eye view of Barcelona at the precise location designed to be the center of modern Barcelona in Ildefons Cerdà’s 1860 city plan. The Collserola hills and the blue Mediterranean Sea, the two guardians of the city can be seen from here, while one can also pick out Montjuïc, the other green mountain in the city, the block pattern of the Eixample, and the towns that were once outside Barcelona, like Gràcia, Horta, and Sant Andreu.

A city is much more than its streets and monuments; it is its people and their way of life. This new viewpoint affords visitors a privileged view of the intersection of city’s main avenues: Meridiana, the Gran Via de les Corts Catalanes, and Diagonal, providing an idea of the flows and rhythms of the city.